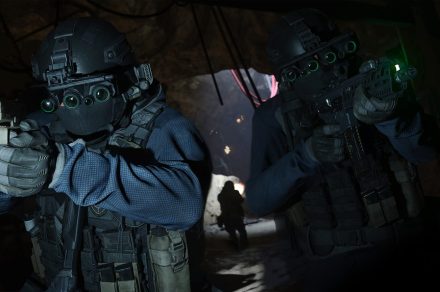 Activision has shown off the gameplay reveal trailer for Call of Duty: Modern Warfare II as part of Summer Game Fest. The trailer features a first look at the game in action and follows a group of operatives infiltrating a ship in the middle of the ocean.

You can watch the full gameplay trailer below.

There’s still a lot left to show, but based on the trailer above, it’s clear that developer Infinity Ward is leaning into nostalgia. The ship itself is reminiscent of the Wetwork map from Call of Duty 4: Modern Warfare. The opening level of that game also features a similar ship infiltration.

Modern Warfare II serves as a follow-up to 2019’s Modern Warfare, and according to Infinity Ward Studio Aart director Joel Emslie,  is the most “ambitious, beautiful, bombastic, melt-your-face-off game” the studio has ever created.

But that isn’t the only thing Infinity Ward has up its sleeve. The company will also develop the next iteration of Warzone alongside Modern Warfare II, which is gearing up to launch sometime in 2022.